To start with as many of you NFL fans know the offseason brings great highs but also many lows. Most times an NFL franchise can be like a revolving door with many Fan Favourites never returning, this offseason may have been one of the worst. We lost #80 the big man, the go to guy, Andre Johnson. This hurt as he has been with us from the start and is a great example of a human being on the field and certainly off it. I don’t blame Andre, a player off his calibre certainly deserves his shot at a Super Bowl ring. I just wish we could have been that team that gave him it. We can’t dwell on these things though. We have to pick ourselves up and look to the future and this season is now shaping up as one to lick your lips about. With B.O.B in his second season as Texans head coach I can see the plan beginning to unfold, he is bringing the Bill Belichick work ethic (not spygate or deflategate hopefully) to the great state of Texas. The players are buying into it and if you don’t you aren’t here. He wants winners and that’s what we as fans want.

Our Offense this year will have a competitive persona with both Mallett and Hoyer impressing in OTA’s, this could be the year that the Texans have that break out QB that can carry the Franchise to the next level. I look forward to a fit Mallett and his rocket arm connecting with Hopkins downfield. The Texans have been crying out for a deep threat QB to compliment our excellent running game. Hopefully we go back to a few seasons ago when the bootleg plays would slash teams and also open up that short passes to the TE that I feel was absent from last year. I must admit I never really ever have much to say when it comes to offense, it’s just not the side of the ball I like the most. I am a defensive guy at heart and I don’t think you get much better around the league now than our very own Bulls on Parade. Our defensive line up which when fit and this season looks to be promising is something to be feared and I feel sorry for the QBs in the AFC south as they will as you know have to face this wrecking crew twice a year. With Clowney last year’s No1 draft pick coming off a disappointing season that seen him injured and questioned over his work ethic and commitment, I see this young man coming out with a point to prove and also critics to silence. What better way to do that than to line up alongside one of the Texans greatest pickups #75 Vince Wilfork. A seasoned professional with vast experience in winning it all on numerous occasions, he demands respect on the line with his size and strength and often takes the focus of two men which opens up the opportunity for the likes of Clowney or Mercilus to make those big QB plays. He is also what we need as a big run stopper in there so we will force teams to the air. I also look forward to having a fully fit Cushing back as this guy is a terror at LB he is intense and is a fantastic defensive captain. Have I forgot anyone important on Defense… WATTTTT was that you say. How can I not speak about about this guy the Defensive MVP and for many last seasons MVP ( I had a few arguments with packer fans on this matter) I maintain he should have been as no one does Watt he does. He is a phenomenal talent with a huge engine. His motto of “Dream Big, Work Hard” can be seen in everything he does, having been to NRG 4 times and seeing the NRG levels this guy creates in the crowd are almost unbelievable. If he remains fit all season then nothing is impossible for the Texans from this threat on both sides of the ball.

I’m excited to be a Texan fan this year I really believe we have a credible chance of making a run at the AFC championship game. This could be our chance to finally put the Colts in their place at Lucas field that is a scalp I am dying to get. They are our only real challenge to being crowned AFC South champs, I don’t believe the Titans are strong enough yet and the Jags are the jags. Gus Bradley is doing wonderful things there but it is what it is and I don’t think they have made the same moves that we have to bolster up. As for a prediction in games I’m looking for double figures this year if we are going to cause any real threat, so 11-5 is where I’m at with most wins coming from within the AFC south division(5). 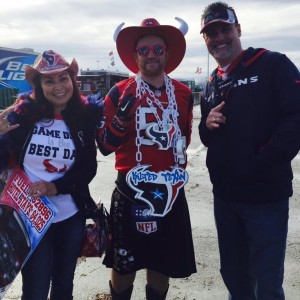 Things to do in San Francisco, California