Erica Tamposi: The Woman Around the NFL

“A day in the life of me is so hard to pin point because I am juggling so many things – but I like it like that” reflected Erica Tamposi, associate producer for NFL Network.

You may know Erica as Patriots-loyal Ricky Hollywood, the glue that holds the popular Around the NFL podcast together. When she’s not behind the glass, shes’s co-hosting The Broadcast podcast with Emma Sauerwein, recording the Jeselnik and Rosenthal Vanity Project at Comedy Central or hanging out with her puppy, Thor.

This season, she’s stepping in front of the camera as part of the new NFL Fantasy League One show. She’ll be working alongside virtual gridiron veterans Adam Rank, Michael Fabiano and the hosts of The Fantasy Footballers podcast, a testament to Tamposi’s tenacity.

Her notoriety amongst NFL fans speaks largely to her all-hands work ethic and lively personality that is so unapologetically herself, something oftentimes polished away in the business of sport. Well-loved and respected among her colleagues and fans alike, she still receives an unfair level of scrutiny, with threads on Reddit dissecting her work in a way that is not shared among her male counterparts.

Speaking in between her hectic schedule, Erica reflects on her career so far, the changing face of women in the NFL and of course, Danny Amendola.

Let’s start at the beginning, has football always been a passion of yours?

Growing up in New England in the dynasty era made it pretty impossible not to be a fan. I got to watch my now 100 year old grandfather witness the Red Sox beat the curse, and the Patriots rise from their losing days into the Tom Brady years. Everyone in Boston bleeds Boston sports. It’s just a way of life there. Over the years I just became more and more invested in the team and as I got older, tailgating in the parking lot before games was so much fun. We used to drive down to Gillette [stadium] and tailgate even if we couldn’t afford tickets to the game. To be around a Patriots crowd outside the stadium were some of my favorite university memories.

Was it this led you to working for the NFL?

This was never, ever in the plan! I have always wanted to be a director. After graduation, I moved out to Los Angeles to pursue film and TV. I worked on TV shows like Justified, Mr. Robot, Drunk History, World of Dance and more but each show only had work for a short contract. I was looking for my next gig when I emailed someone back home that gave me my first internship, Matt Doyle, to see if he had any advice. I worked with Matt at an advertising agency doing video production. He has a long history at ESPN and linked me with my current boss now at the NFL. I’m very grateful for the connection!

We’re all grateful too! Besides looking after the Around the NFL guys’ problems, what does your day to day look like? From your socials, it seems like you do a million different things!

A day in the life of me is so hard to pin point because I am juggling so many things, but I like it that way. I start my morning with a cup of coffee and walking my puppy, Thor.

On my way into the NFL, I try to clear my head before the day and blast some music. My friend and co-host, Emma Sauerwein, of The Broadcast and I usually shoot ideas back and forth about what we’d like to do for the following show. She is the insanely talented writer behind the whole thing. I’m the clown who helps with ideas and acts wild on the show. It’s a great dynamic and an amazing show, but maybe I’m biased! [editor: she’s not, it’s great!]

It’s interesting because at most other jobs, seeing employees on twitter all the time would be frowned upon. However, I always have mine open as it’s the best place to track NFL news and what’s going on. I work to manage Around the NFL’s schedule and programming while also handling the operations of the show. It can get quite overwhelming but I love it.

I’m also talent on a new NFL Fantasy show, that’s coming out relatively soon. I wish I could plug more about it, but it’s a huge opportunity for me to not just be a producer but on the other side of the camera. I’m really excited!

Meetings and tapings for that are sprinkled in through my day and once a week I record the Jeselnik and Rosenthal Vanity Project with comedian Anthony Jeselnik and Gregg Rosenthal [of Around the NFL] at Comedy Central. I send them a list of stories that are happening during the week and create a run down and then let them do what they do best with it – be funny.

Then I go home and snuggle Thor and cry myself to sleep while shoving cookies in my mouth. Just kidding, only half of that last sentence is true.

Things seem to be different for women in the NFL at the moment – Mina Kimes is in the Rams booth, we had an all female commentator team last year and more and more women are in analytics positions.  Do you feel like anything has changed for women since you started working for the NFL?

I’m blessed to have been welcomed into this sports world at a time where women are so into supporting each other. It’s super cool to see women rising up in the sports field and gaining the respect that they deserve. Women in general have to deal with things like wardrobe, aging, and other look factors way more than men. It’s the sad truth, but I see the industry and public perception attempting to change and accept more. It’s really cool to see. We are judging women less on their looks and more on their knowledge and work ethic. We still have a long way to go, but there really seems to be a shift happening.

You mentioned above things women have to deal with that men don’t, what’s the biggest challenge you face as a woman in the league, if any? Is the specific scrutiny reserved just for women?

I have a masters degree in “creeps”. The audacity people have behind a screen is actually unbelievable. Sometimes I read things and I’m stunned. It’s challenging being a woman in media (not taking away from my male counterparts – scrutiny in the public eye is everywhere). People are quick to attack a woman’s weight or looks where they would normally call a male’s point “stupid” or wrong. Yet, if I say something they disagree with, they can be quick to call me fat and ugly instead of wrong on a particular subject. That goes for all women. I’ve had people tweet gifs relating to that time of the month when I show emotion about something I’m upset about. It’s just a different world.

But there are a lot of supporters out there as well. I have a very, very, small concentration of “fans”. I can’t even imagine what it’s like for those who have double, triple, quadruple the amount of followers as me. You just have to tune out the negative, as hard as it is to push to the wayside.

Thinking more positively, what do you think the future looks like for women in the sport – do you think we’ll see all-female commentator teams becoming the norm so they’re no longer called ‘all-female’?

I get excited when I see an all-female commentator group but yes, it’d be great to become the norm. I think diversity is key into well rounded commentary – regardless of the subject matter- and the more we can work as a culture to improve that will only help the sport. We’re already seeing female referees and coaching positions. I really do hope I get to see the first female head coach. Not only do I want to see “her” coach an NFL team but have her be a total winning badass.

There’s a lot of camaraderie and support between the women of the sport, at least from the outside. Is there anyone you’re a big fan of, or you think will be a big star (apart from yourself, of course!)?

Women supporting each other is critical. There is room for everyone on this stage and we need to keep building each other up. There are so many amazing ladies out there in the NFL sports world right now. I’m a big fan of Caroline Cann, a reporter for the Carolina Panthers. I am definitely not a Panthers fan (let the record show!) [editor – okay!], but her work and humour in her videos and vlogs she does around the team is a cool twist that makes the Panthers facility look awesome. I would kill to do that with the Patriots.

Okay, let’s talk Patriots! What’s your outlook for the season ahead?

I really don’t think this is Brady’s last season, unless he gets another ring. Four times in a row to the Super Bowl? I mean that solidifies he is the greatest of all time for any of the doubters out there [Erica rolls her eyes]. He’s confident, he’s having fun, he showed up to a recent preseason press conference in a large fedora. Brady has the charisma and passion and talent. He’s still threading the needle with his passes and his brain is just years ahead of these other quarterbacks. The Patriots scheme and playbook is elite and Belichick is always working to improve. The team has new weapons like Jakobi Meyers and Chase Winovich as well as Josh Gordon coming back, Edelman and our defensive veterans. Call me crazy, but I think Brady won’t stop until he gets 7.

I have to ask, how do you feel about Amendola catching dimes from Matt Stafford?

I’m happy for him. I hope he gets to play a lot for Detroit. He didn’t have a superb season in Miami, but he comes alive in January. I still think he looks best in the Patriots uniform, but go get your money honey!

It’s fun. Have fun with it. I like to make a list of players I want and in the order of how I want them. When it comes to draft day, I keep that list handy and cross them off as they get picked off. The stress of the clock can sometimes cloud your judgement so if you have a plan going into it, you’re better off. Sometimes it’s better to further removed too. If you focus so much on all the fantasy analysis right before your draft, it’s overwhelming. Trust your gut and you can always trade or pick up players down the line. Have fun!

Thanks Erica, I will! 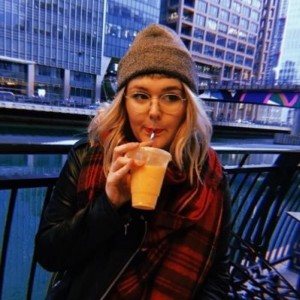 Things to do in San Francisco, California

One thought on “Erica Tamposi: The Woman Around the NFL”