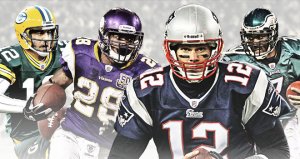 My boyfriend and his friends have played NFL Fantasy for years and this season I decided to join in … I was too late for the draft and we were already two games in to the season so as a way to build up my knowledge of players in the different teams and my knowledge of the game in general, I joined the NFLUK Fantasy Football.

For those of you who aren’t familiar with how it the NFLUK one works, you can pick a new team each week providing you stick to your $18m budget, and you can change any team members right up until that particular game kicks off, just in case anyone questionable or probable ends up not playing!

In Week 3 I officially started to play and my team consisted of Jay Cutler as my QB, Darren Sproles and Marshawn Lynch as my RBs, Antonio Brown and Jordy Nelson as my WRs, Delanie Walker as my TE, Texans as my Defense and Cody Parkey as my Kicker. I even chose Russell Wilson as my Wildcard given their game was on Sky Sports – plus, it was my first one. How could I *not* pick Russell. As would be expected, the player that gained me the most points was Lynch but Antonio Brown was incredible too. I got 112 points that week and ranked 2657th. Not a bad start!

In Week 4 I was starting to get the hang of how it all worked a little better. I chose Andrew Luck as my QB, Rashad Jennings and DeMarco Murray as my RBs, Antonio Brown and Jeremy Maclin as my WRs, Martellus Bennett as my TE, Patriots as my Defense and once again, Cody Parkey as my kicker. My wildcard that week was Nick Foles. Patriots well and truly let me down and I got -2 for them but Andrew Luck and DeMarco Murray well and truly showed up – between them I gained 55 points. Overall for that week I got 108 points and ranked 6960th.

Without a shadow of doubt, Week 5 was (and still is) my best week! I had Russell Wilson as my QB, Marshawn Lynch and DeMarco Murray as my RBs, Antonio Brown and Steve Smith as my WRs, Martellus Bennett as my TE, Eagles as my Defense and Cody Parkey as my kicker. I even chose Philip Rivers as my Wildcard. In Russ We Trust as that week he got 34 points, and Eagles Defense got me an amazing 21 points too. That week I got 129 points and get this… I ranked 600th! Which given this was my 3rd week of playing, I felt amazing. I felt knowledgeable. I guess you could also say I feel smug! Very very smug!

Week 6 I barely changed my team based on the success of the week before. The changes were that I made Andrew Luck my QB and Antonio Gates my TE. I made Russell Wilson my wild card. Andrew Luck and Eagles Defense were my heavy hitters that week and I got 124 points total, ranking 3215th. Not bad. I mean, it’s not 600th, but it wasn’t bad!

Week 7 is where it all started to go wrong! The only changes to my team were Jay Cutler as the QB, Texans as my Defense and Chandler Catanzaro as my Kicker. Thankfully, I had Andrew Luck as my Wild Card because it was he and DeMarco Murray who got me my points. My week ended on a miserable 91 points and I ranked 11804th. My worst result yet!

Week 8 I started to get back on track! I made a couple of small changes to my team with Andrew Luck as my QB, my RBs remained the same, I had Jordy Nelson and Jeremy Maclin as my WRs, Antonio Gates as TE, Eagles back in my defence and Cody Parkey back as my Kicker. And what with it being the weekend I was in London for the Falcons Lions game I just had to have Matt Stafford as my Wild Card. The week was good. I scored 132 points and I ranked 3033rd.

Thankfully, Week 9 got even better. In fact, my team remained entirely the same only I had Peyton Manning as my Wild Card. Everyone I had in my team was incredible! I got 147 points and ranked 949th.

Sadly, in Week 10 I was put a little back in my place. I made some very small changes due to Bye-Weeks. Ben Roethlisberger was my QB, Martellus Bennett back as my QB and Lions as my Defense. Of course, Russell Wilson as my Wild Card. Thankfully having Seahawks players in my team is what got me my best points in the week. I ended on just 111 points, ranking 8331st.

Now, here we are at Week 12. I’ve got a really good feeling about my team. I’ve got for some ‘old faithful’ players … time will tell if these were the right choice and they’re all playing on Sunday.

Liz has covered the NFL for five seasons, and currently serves as Managing Editor for Ninety-Nine Yards and for her own website, NFLGirlUK.com. Since launching the website in 2014, she has made regular appearances on the TalkSport2 ‘All American Sports Show’ with Nat Coombs and in 2016 was ranked No.37 (of 400+) in the “Super Bowl: Top 50 UK Influencers” by marketing software producers Analytica for “igniting conversations” between fans.

Become the DraftKings Fantasy ‘King in the North’?

One thought on “My NFL UK Fantasy Football journey … so far!”